Michael Bell has been Canada’s ambassador to Israel, Jordan, and Egypt. He is an adjunct professor of political science at University of Windsor and also teaches at Carleton University.

He is also a complete and total moron.

I don’t say things like this lightly. I really don’t like to engage in ad hominem attacks. But this is the most charitable way to explain the first paragraph of this article he wrote for the Globe and Mail, to which he is an occasional contributor.

It is behind a paywall,  but here is what it says: 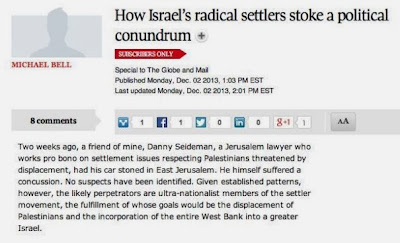 Two weeks ago, a friend of mine, Danny Seideman, a Jerusalem lawyer who works pro bono on settlement Issues respecting Palestinians threatened by displacement, had his car stoned in East Jerusalem. He himself suffered a concussion. No suspects have been identified.

Given established patterns, however, the likely perpetrators are ultra-nationalist members of the settler movement,  the fulfillment of whose goals would be the displacement of Palestinians and the incorporation of the entire West Bank Into a greater Israel.

Among Israelis, debate on their country’s future is, to their credit, universal and wide-ranging. There have been a variety of responses, from a very slim few welcoming the attack to the great majority who see it as a transgression of Zionist ideals. Indeed, Mr. Seideman has received messages of regret and concern from a number of the settlement communities’ leadership.

…Mr. Netanyahu – as did his predecessors – has an immediate problem, illustrated by the “Seideman incident.” That problem is the willingness of the ultras increasingly to violate Israeli law in pursuit of their vision of a Greater Israel. A kind of theological fervor governs their behavior, albeit a common and pervasive phenomenon elsewhere In the region. For, as they believe, one cannot ignore the will of the Deity?

The only problem is that Seidemann was attacked by Arabs.

He was visiting a Palestinian friend in an Arab neighborhood of Jerusalem, Sur Bahir. He admits having been targeted previously for being a Jew in Arab neighborhoods. Representatives of the Arab community visited him and expressed regret. The Jewish doctors that treated him all pretty much asked what he was doing in a neighborhood where Jews are routinely attacked if they step foot.

There are no Jews there.

As far as I know, outside of “ultra” religious idiots in Mea Shearim who hate people driving in their neighborhood on Shabbat, there have been no instances of Jews throwing rocks at moving cars.

There are certainly no “established patterns” of Jews throwing rocks at Arab cars (or cars driven by Israeli leftists.)

Jews (and Arabs who look like Jews) who accidentally enter Arab neighborhoods in Jerusalem have been almost lynched and subjected to barrages of rocks thrown by dozens of Arabs, egged on by photographers. 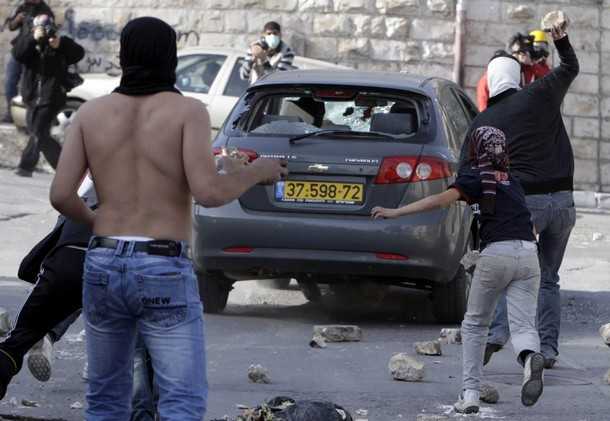 One rock throwing was caught on video just yesterday.

Seidemann freely admits it was Arabs who threw the rock that injured him.

But Bell, a former ambassador to Israel, apparently is so obtuse, so suffused in his righteous anger to blame “settlers” for everything wrong in the Middle East, that he seemingly only glanced at the news about his “friend” Seidemann and filled in the blanks in his incredibly biased professorial brain.

There is a double bias here shown by the professor. Not only is he willing to exaggerate events to blame Jews, he is willing to ignore Arab violence that happens every day in Jerusalem.

The charitable explanation is that Bell is a complete and utter moron who cannot be trusted to read simple English sentences. The alternative is that he purposely chose to twist Seidemenn’s words to blame his favorite bogeyman, the “ultras.”

Bell’s grasp of basic facts about Israel are no more accurate:

Such is the conundrum of Zionism today: The mainstream’s goal being the establishment of a Jewish democratic national state; the religious nationalists’ being the control of the land as the instrument of redemption, in some cases at whatever cost. The seed of defiance stems largely from the latter’s drive to settle the densely Palestinian populated Samarian mountain ridge. Largely these high points but not only the ridge. [sic] Mr. Seideman has been most active respecting the Elad settlers’ movement in Silwan, a Palestinian neighborhood just outside the Old City’s walls, beneath which the earliest foundations of Jewish Jerusalem lie.

This is barely understandable English, further proving that The Globe and Mail’s editor was asleep when this came in. Still, anyone who has driven in Judea and Samaria sees that Jewish settlements are generally not near “densely Palestinian populated” areas, the Arabs generally live in valleys while the settlers usually gravitate towards hilltops, and most of the area is quite empty. Well over 95% of Arabs live in Areas A and B where there are few if any Jews.

Also, Silwan was originally a Jewish neighborhood of Yemenite Jews. The Jews were driven out, attacked in 1921 and again in 1929.

Who knows who attacked the Yemenites? Maybe Professor Bell can write an article blaming the settlers. I mean, who else could have attacked Jews when Arabs and Jews lived so peacefully together before “occupation” according to morons like Bell?  It makes just as much sense as what he wrote here.

The idea that such an ignorant person was an ambassador – a job that requires a tiny bit of knowledge about the host country – is nothing less than astonishing.

I’ve seen a lot of media bias over the past decade, but this is off the charts. I actually was a student under Professor Bell when I attended the University of Windsor, and I will attest that it is more out of bias than it is ignorance. As being, quite possibly, the only pro-Israel student in a class that had 25-30% Arabs, he certainly puts a lot of blame of the conflict upon the religious Israelis, but he’s fully aware that the Palestinians are not saints either.

I take your point.

My information was received early on but was incorrect.

It needs to be made good.

My guess is that he will change it to a generic anti-settler screed without mentioning once the truth about stone throwers in the Jerusalem area, since that is a fact that must be hidden from the world.