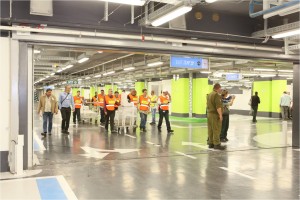 A large scale drill was conducted yesterday (Mar. 25) at the Rambam Health Care Campus in Haifa. The primary objective of the drill was to test the operations and preparedness of the Sammy Ofer Fortified Underground Emergency Hospital, scheduled to open in the next couple of months.

The 2,000-bed Sammy Ofer Fortified Underground Emergency Hospital (FUEH) is the largest of its kind in the world, designed to protect the patients of Northern Israel in times of war. The concept behind this integrated parking lot/underground hospital was conceived after the Second Lebanon War, during which the hospital came under direct rocket fire. Lessons learned from that experience led to the design and construction of the underground hospital to assure the safety of Rambam’s patients and personnel. Another drive to construct such a facility emanates from the understanding that the next war will necessitate provision of medical care under fire. 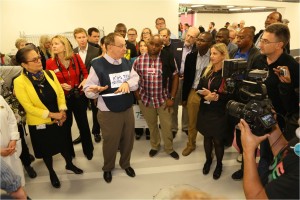 With recent history in mind, part of this exercise included a simulation of Rambam Hospital under a missile attack—an all too realistic scenario. The drill included transfer of one large department and a few medical units from the hospital’s main building to the FUEH, which extends three floors underground. The logistic exercise included operating of systems and the deployment of necessary equipment. Once set up, hospital staff practiced the transfer of hospital beds and equipment to designated locations on each of the floors of the underground hospital, including the transfer of complex intensive care, dialysis, and surgical equipment. During an unexpected emergency the FUEH will have to receive hundreds of oncology and gynecology patients, dozens of dialysis patients, and hundreds of other patients in need of medical services—not to mention the wounded coming in from the battlefield or the civilians wounded in the rocket attacks.

This exercise is a small part of the massive logistical operations practiced at Rambam in preparation for times of crisis conducted with the assistance of other agencies, including the Home Front Command (HFC), the Ministry of Health, Magen David Adom (MDA), and the Haifa Municipality.

“In 2006 we had to face impossible challenges when the hospital came under missile attack , while at the same time tending to the wounded among civilians and soldiers ,” explained Prof. Rafi Beyar, Director and one of the initiators of Rambam’s underground hospital, “we decided to take our fate into our own hands. Eight years later, here stands a structure built with careful planning to benefit patients in the region. I hope we never have to use this facility, but if the day comes—we’ll be ready for any scenario.”

Considered an essential strategic facility serving all of Northern Israel, the underground emergency unit serves as a parking lot at peace times. The underground hospital can accommodate 2,000 beds plus the full complement of hospital staff, numbering in the thousands. The bottom two levels of the facility are fully fortified against conventional and unconventional warfare. The hospital can be cut off from the outside world for 72 hours and  has its own independent electric and water supply.

Construction of this massive facility required excavating below the level of the water table, resulting in flooding. For 36 months groundwater was pumped back into the sea by over 100 pumps, at a rate of 12,000 cubic meters/hours. With drainage complete, the framework was built using 7,500 tons of steel. The foundations were laid and the structure took shape using 80,000 cubic meters of concrete.