New book: Nothing Abides – Perspectives on the Middle East and Islam by Daniel Pipes

Nothing Abides
Perspectives on the Middle East and Islam 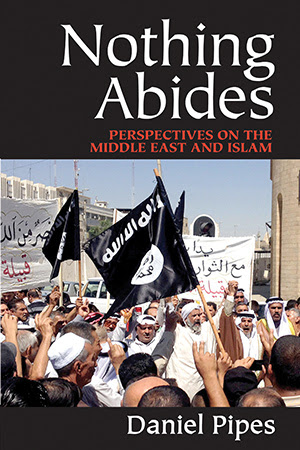 Daniel Pipes has collected some of his sharpest and most prescient writings from the quarter century 1989–2014. In them, he addresses a range of current topics, from the origins of the civil war in Syria to denying the Islamic factor in terrorism, to the way to resolve the Arab-Israeli conflict. Pipes pursues two themes in particular: the internal instability of Muslim-majority countries, in which nothing abides, and the expression of Muslim drive to apply Islamic law.

Pipes’ interests concentrate on the Middle East as understood from a historical point of view and on the role of Islam in politics. Divided into five thematic sections, this work addresses the Arab-Israeli conflict, Middle Eastern politics, Islam in modern life, Islam in the West, and individuals connected to American Islam.

Pipes’ deep knowledge, gained over forty-five years of study, combined with incisive writing and a well-regarded courage to speak out on controversial topics make Nothing Abides a compelling read for Middle East specialists, students, and the interested public.

Read the Introduction to Nothing Abides

Buy this book at Amazon.com

The Middle East Forum, headed by Daniel Pipes, will send a complimentary copy of Nothing Abides signed by the author for a donation of US$150. To take advantage of this offer, please click here.

I The Arab-Israeli Conflict

IV Islam in the West