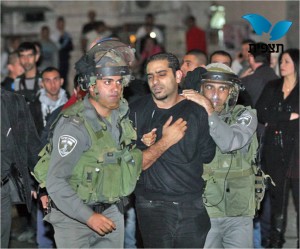 Renewed talk of territory exchanges between Israel and a future Palestinian state as part of a peace agreement, a proposition championed by Foreign Minister Avigdor Lieberman, has left many Arabs who have Israeli citizenship worried about losing their status as citizens of Israel.

According to the Israeli daily Ma’ariv, Israel has proposed to the Americans transferring Israeli Arab villages and towns to the Palestinian Authority as part of a land swap that would place Jewish communities in Judea and Samaria under Israeli sovereignty. The proposal means that some 300,000 Arabs with Israeli citizenship from some 10 towns would be allowed to stay in their villages in the “triangle” area along the border with Judea and Samaria, finding themselves living under the jurisdiction of a Palestinian state.

This proposal has been strongly and continuously rejected by leaders of the Israeli Arabs, who expressed outrage over the idea. “This is an imaginary proposal that relates to the Arabs as if they were chess pieces that could be moved around according to the wish of the players,” said Ahmed Tibi, an Arab member of the Knesset. Another Arab Knesset member, Afu Ighbarriyeh, said, “Citizens of a democratic state are not tools or hostages in the hands of their government.” Both Tibi and Ighbarriyeh are from towns in the triangle area; Taybeh and Umm al-Fahm.

MK Tibi was interviewed this week on Israel’s army radio, together with MK Tsipi Hotovely (Likud). Mk Tibi, who served as Yasser Arafat’s advisor for many years, stated such a suggestion is offensive, claiming that the Arabs are natives of the land who have always been here. He said he is a Palestinian by all aspects, culturally historically and by national identity, yet was unable to explain why he desired to stay an Israeli citizen. He kept on citing his rights to his land, a point not contended by the proposition of land swaps. He claims Palestinian negotiators have discussed the proposition with secretary of state Kerry and have rejected it.

MK Hotovely believes such a move is an historical mistake, as are all territorial concessions. As for the Israeli Arabs rejection of the proposition, she said: “They want to enjoy both worlds, Palestinian nationals enjoying the life in Israel.  If they suffer so much from Israeli oppression they now have a golden opportunity to receive Palestinian citizenship. The reason they oppose the move is because they want the high standard of life and the democracy Israel has to offer them. They can’t hold on to both options,” she concluded.

A public opinion poll conducted by the Arab Center for Applied Social Research in November 2007 found that more than 70% of Israeli Arabs are opposed to any proposal to annex towns and villages in the “triangle” area to the Palestinian Authority in exchange for the annexation of parts of Judean and Samaria to Israel.

These Knesset members are fully aware that they would lose most of their privileges under most Arab regimes, and this according to Abu Toameh, is the real reason why they are strongly opposed to the latest proposal. The Palestinians have their own parliament in the West Bank and Gaza Strip, but it has been paralyzed since Hamas seized control of the Gaza Strip in 2007. In most Arab countries, parliament members who dare to criticize their rulers often find themselves sitting at home or behind bars.

Abu Toameh concludes by stating that if the Arab Knesset members are so worried about becoming citizens of a Palestinian state, they should be working toward integration into, and not separation from, Israel. The Arab parliamentarians need to listen more to what their constituents are telling them and not to the voices of Fatah and Hamas.

← PREVIOUS ARTICLE
Why This Boycott Is Not Like the Others