Gideon Levy in Haaretz writes about how cruel Israelis are destroying Palestinian olive trees, seemingly for no other reason but to persecute their owners:

Two days after Prime Minister Benjamin Netanyahu declared, on Tuesday last week, his intention to annex the Jordan Valley after the election, forces of the Civil Administration carried out yet another brutal operation of destruction. The target this time was particularly remote: a rocky hillside adjacent to the village of Tamoun in the northern valley. The goal was singularly vicious: the uprooting of hundreds of olive trees that were about to yield their first fruit…

Four days later, on Monday, the groves’ owners stood next to their felled trees and their ruined cisterns, sadly rolling bits of olives from the felled trees between their fingers. The first crop of these seven-year-old trees was set to be harvested in another few days, but the Civil Administration’s terminators got here just before – as if to rub salt in the wound. The butchered trees are withering on the ground; their fruit is dying on the slashed branches.

Here is the photo of the uprooted trees from the story: 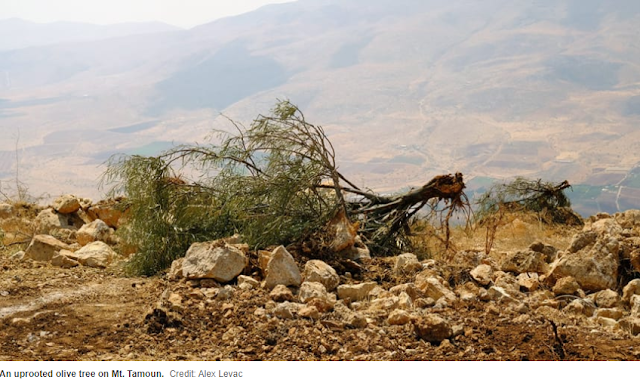 There’s only one slight problem. These aren’t olive trees.

Dr. Einat Wilf at UNHRC: If the conflict is ever to end with peace, UNRWA should no longer exist (UN Watch via Youtube)