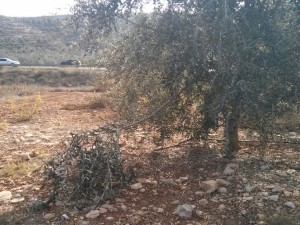 In apparent acts of theft and vandalism commented by Arabs against Israeli owned groves in Judea and Samaria tens of trees have been destroyed and the produce has been stolen.

The latest incident occurred at Kdumim, in Samaria. Late Saturday night (Nov. 2) some 400 kilos of olive produce were stolen from a grove owned by the community. This is the eighth time that the grove has been targeted by thieves in the past weeks. The burglars use the same pattern and the same entry point every time. In this incident the security cameras identified the infiltration, but security forces arriving on the scene were too late. Several trees were damaged during the theft. The police have so far been unable to prevent these reoccurring attacks. Baruch, one of the farmers, told Tazpit his heart aches every time he encounters the destruction and loss.

Last Thursday (Oct. 31) farmers from Shiloh were dismayed to find tens of trees in their fields broken, and the olive produce stolen. The damage is estimated at tens of thousands of NIS. Yair Eldar, the grove manager, told Tazpit News Agency of what he encountered: “I was able to see the mass destruction from the road. I found large sheets used for the collection of the stolen produce. I then walked through the grove and found dozens of the trees broken and basically ruined. The damage is immense.” The IDF arrived on the scene in this incident as well, but was unable to apprehend anyone in connection with these acts of vandalism.

On Oct. 23rd, accompanied by radical left-wing anarchists, Arabs entered a Jewish owned grove in Gush Etzion. They tore down fences and uprooted the irrigation system. They further attacked the Jewish farmers, wounding five, while throwing stones at passing cars. The IDF is now prohibiting any entry into the field, claiming that the ownership of the field is under legally contention. The field has been tended by Israeli farmers for the past thirteen years.

Such acts of destruction have become by now a prevalent phenomenon during this sensitive time of year. The Jewish farmers remain defenseless in many cases, losing overnight a lifetime investment of resources and effort.

NEXT ARTICLE →
The Significance of Hamas’s New Textbooks