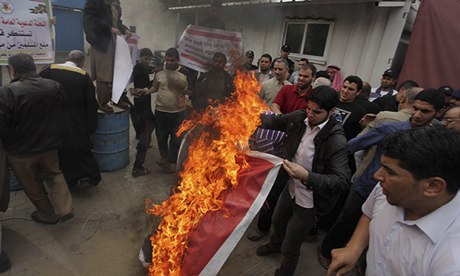 Palestinians burn Angola’s flag in a protest amid reports that the country has banned Islam and destroyed mosques. Photograph: APA/REX

Angola has been accused of “banning” Islam after shutting down most of the country’s mosques amid reports of violence and intimidation against women who wear the veil.

The Islamic Community of Angola (ICA) claims that eight mosques have been destroyed in the past two years and anyone who practises Islam risks being found guilty of disobeying Angola’s penal code.

Human rights activists have condemned the wide-ranging crackdown. “From what I have heard, Angola is the first country in the world that has decided to ban Islam,” said Elias Isaac, country director of the Open Society Initiative of Southern Africa (Osisa). “This is a crazy madness. The government is intolerant of any difference.”

Officials in the largely Catholic southern African nation insist that worldwide media reports of a “ban” on Islam are exaggerated and no places of worship are being targeted.

The UK has just named Angola as one of its five “high-level prosperity partners” in Africa and the two countries have a burgeoning trade relationship. The Angolan president, José Eduardo dos Santos, Africa’s second-longest serving head of state at 34 years, has long been accused of corruption and human rights abuses.

Religious organisations are required to apply for legal recognition in Angola, which currently sanctions 83, all of them Christian. Last month the justice ministry rejected the applications of 194 organisations, including one from the Islamic community.

Under Angolan law, a religious group needs more than 100,000 members and to be present in 12 of the 18 provinces to gain legal status, giving them the right to construct schools and places of worship. There are only an estimated 90,000 Muslims among Angola’s population of about 18 million.

David Já, president of the Islamic Community of Angola (ICA), said on Thursday: “We can say that Islam has been banned in Angola. You need 100,000 to be recognised as a religion or officially you cannot pray.”

There are 78 mosques in the country, according to the ICA, and all have been closed except those in the capital, Luanda, because they are technically unlicensed. “The mosques in Luanda were supposed to be closed yesterday but because of an international furore about reports that Angola had banned Islam, the government decided not to,” Já said.

“So, at the moment, mosques in Luanda are open and people are going for prayers.”

Já said the government began shutting mosques in 2010, including one that was burned down in Huambo province, “a day after authorities had warned us that we should have not built the mosque where we had and that it had to be built somewhere else. The government justified by saying that it was an invasion of Angolan culture and a threat to Christian values.”

Another mosque was destroyed in Luanda earlier this month, Já said, and 120 copies of the Koran burned.

Muslims have been instructed to dismantle mosques themselves, he added. “They usually issue a legal request for us to destroy the building and give us 73 hours to do so. Failure to do so results in government authorities doing it themselves.”

Women who wear the traditional veil are also being targeted, Já said. “As things stand, most Muslim women are afraid to wear the veil. A woman was assaulted in hospital in Luanda for wearing a veil, and on another occasion, a young Muslim lady was beaten up and told to leave the country because she was wearing a veil.

“Most recently, young girls were prohibited from wearing the veil in Catholic schools and, when we went there to confront the nuns, they simply said they couldn’t allow it. Although there is not an explicit written law prohibiting the use of veil in Angola, government has prohibited the practice of the faith and women are afraid to express their faith in that sense.”

The ICA’s complaints were supported by Rafael Marques de Morais, a political activist and leading investigative journalist in Angola. “I’ve seen an order that says Muslims must destroy the mosques themselves and clear away the debris, or they will be charged for the cost of the destruction.”

He suggested the government was seeking to find a convenient diversion from growing public hostility towards Chinese and Portuguese workers in Angola. “The government need to deflect attention. They are trying to find a scapegoat for economic pressures and saying Islam is not common to Angolan values and culture.

“They believe a blanket law against Islam will get the sympathy of both Angolans and those in the international community who equate Islam with terrorism.”

Asked about the potential for Muslims to protest, Marques replied: “If the Muslims try to show any anger, they will be deported the following day.”

But the Angolan government denies any attempt to ban Islam. “There is no war in Angola against Islam or any other religion,” Manuel Fernando, director of religious affairs at the culture ministry, . “There is no official position that targets the destruction or closure of places of worship, whichever they are.”

A statement from the Angolan embassy in the US concurred: “The republic of Angola … it’s a country that does not interfere in religion. We have a lot of religions there. It is freedom of religion. We have Catholic, Protestants, Baptists, Muslims and evangelical people.”

NEXT ARTICLE →
History of boycott, divestment and sanction, 1933 to the present